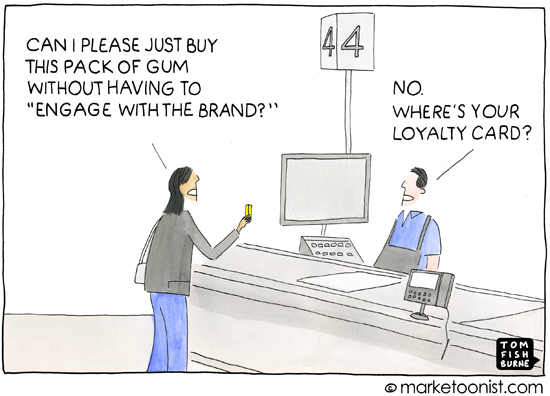 The only thing you needed to buy was a dozen eggs, but somewhere on Aisle One you were Brand Attacked!

It happens when people, sitting idly around the marketing department, start wondering how they can engage new consumers better and faster.

There are marketing numbers to support the fact that personal contact increases consumer interest in your brand. But a brand that has done its homework does not have to intrude.

The process of turning your product or service into a brand is one of discovery. You imbue your brand with traits and characteristics that appeal. You write them stories that resonate with your target consumers. And, most of all, you communicate more easily and directly with them. New and Improved Sludge Chewing Gum probably had the idea their target consumer was EVERYONE. Anyone and everyone who met the pretty promoters would instantly become a consumer, they thought.

But “Everyone” is not a target group. It is the population of Earth.

A brand begins to intrude when it strays too far afield. Brands, being similar to people, have certain attributes and qualities that lend themselves work well in certain spheres. Coca-Cola’s brand spreads a wide net, but what if they suddenly endorsed a political party? What if they showed the Devil (without an ironic twist) drinking a Coke?

Admittedly they could do it – and they might still – but it would alienate the brand’s loyal adherents.

The brand has room to move and expand into new areas, but it moves like an iceberg. The brand takes incremental steps to move it into new territory. Just like when your friend Vlada starts to grow a hipster beard, you have built-in transition time. You get used to it slowly. Soon you might not remember him without it. But if you only see him every few months, your reaction to his “sudden” beard could be: “Dude! What the hell is THAT all about?”

The pretty promoters of Sludge try to take us there too fast. The tactic will work with some people, but the masses need time to adjust. For the rest of us it is just intrusive.

And where are those eggs anyway?